Wordle – how to maximise your chances of getting it in two 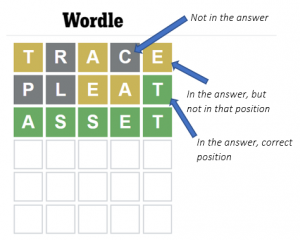 APR is an organisation that keeps its finger on the pulse, whether that be by providing innovative and resourceful technical solutions in our consultancy work, or offering flexible interim resourcing in the ever-changing actuarial landscape. As such, we thought it was high time to write an article on a little-known gem called Wordle…

Wordle is a web-based word game with a simple premise: the player tries to guess a random five-letter word in six or fewer tries. After each guess, you’re given information to narrow down the answer: letters in the right place turn green, letters in your guess that are in a different place in the answer turn yellow, and letters that aren’t in the answer turn black. If you’ve seen the gameshow Lingo, or played the game Mastermind, you should be familiar with this.

As it’s a game of perfect information there’s a lot of room for strategy but, somehow, APR have been beaten to the punch on this. There’s a lot of strategy guides available online, and videos claiming to give the best words to use. 3blue1brown made a video here that goes into finding the best opening word: it’s far better than any article I could write. But there’s more than one way to play Wordle well: do you try to ensure that you always win in six guesses, or play dangerously and prioritise getting the answer in two or three guesses?

In this article, I want take a look at what I’m going to call a “Wordle birdie”: getting the Wordle in two guesses. I’m interested in this as if you take a look at my statistics (below), it’s something that’s eluded me: I’ve got plenty of Wordles in three but none in two, and everyone who I’ve spoken to seems to have got a Wordle birdie at least once. 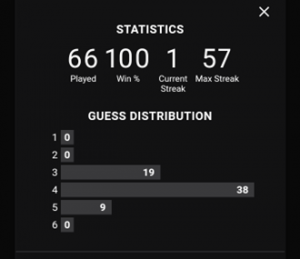 What’s the cause of this? Is it a difference in strategy, are they lucky, or could it be that they’re just better than me at Wordle? And what is the optimal strategy to try and get Wordle birdies?

Well, there’s not too much strategy to getting Wordle in 2. You guess your first word, get some information, and make a second guess from the Wordle answer list consistent with that information. Usually, you can’t uniquely identify the answer after one guess so there’s no way of guaranteeing success.

Let’s take an example, and pick a random 5 letter word to be our first guess: BIPED.

When we make this guess, we’ll get some information. In total there are five letters, each of which can turn into one of three colours so, naively, there are 35 = 243 colour combinations in total, although the 5 combinations of 4 greens and 1 yellow aren’t possible, reducing the total number to 238. However, for any given first guess, many of these 238 colour combinations aren’t possible – in our case BIPED isn’t possible, as there is no word in the Wordle answer dictionary that starts with BIPE (BIPED is in the recognised guess list but not in the recognised answer list – see below). 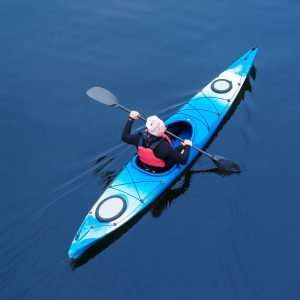 And the worst are:

If you want a bad guess that you’ve actually heard of and spelled in the usual way, then JAZZY is the joint eleventh worst guess at 1.34%. And don’t panic about these weird words: Wordle has a separate answer list and guess list, so while you can guess these unusual words, the answer will always be reasonably well-known.

These words are pretty similar to the best words in the video linked earlier, with our top five being a permutation of theirs. This makes sense, as the qualities you’re looking for in these words are the same: you get the most information from green letters, so you want a word with common letters in the places where they usually appear.

The bad guesses are also fairly unsurprising, if what you want is green letters, and failing that, yellow letters, guessing very rare letters like J, Z or Q isn’t smart. Neither is guessing repeated letters as you usually end up learning nothing that you didn’t already know.

That being said, there are some interesting insights into other common strategies.

Some people like to include a less common letter in their opening guess, as if it is in the word, it gives you a lot of information, and these results seem to back this strategy up. Both TRACE and CRATE contain a C, a fairly uncommon letter, and other good guesses include PARSE, HEART and FEART (feared), containing P, H and F respectively.

A strategy that doesn’t fare so well is guessing lots of vowels. Both AUDIO and ADIEU are actually below average guesses in terms of trying to get Wordle birdies, although whether or not that means they’re poor strategies in general is up for debate, as figuring out where all the vowels are in the answer is more of a long-term plan.

To go back to the original question, given that I’ve played 66 times, then you’d expect me to have got a few birdies by now, so clearly, I’m doing something wrong. As for your friends who seem to have a suspicious number of Wordle birdies, now you know that 6.47% is the theoretical maximum, and any more than that is luck or cheating. 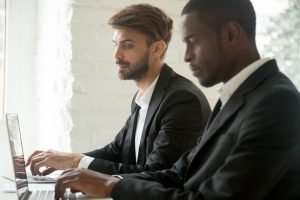 Your friends wouldn’t cheat at Wordle, would they?

There is some selection bias, of course: a friend who has been very lucky is more likely to brag to you than a friend who hasn’t. This article is supposed to be statistical though, so I’ll round off with a binomial test.

For a player who’s played 50 times, the magic number is 6 Wordle birdies, which gives a p-value of 4.1%. In fact, these numbers assume that your friends are playing Wordle perfectly, which they probably aren’t, so in practice, even these numbers would be questionable.

To conclude, I’m surprised these numbers are so high – I’d have thought getting Wordle birdies would require more luck! While the figure of 6.5% assumes perfect play, if you’re picking any reasonably sensible first guess, and then something consistent with that guess on your second try, your odds are still over 4%. None of this explains why I don’t get them though! In 66 tries, I should have got one by now, and my code seems to show that my strategy isn’t too bad. I guess all that’s missing is a little patience…

When Alexander of Macedonia was 33, he cried salt tears as there were no more lands to conquer. I’m only 23!