Introduction – what is a green bond? 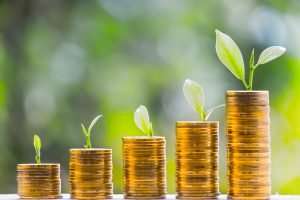 Although the term ‘green bond’ may be relatively new, the general idea isn’t dissimilar to conventional bonds. For a conventional bond, the investment could fund anything within a company or business, e.g. buying a new piece of machinery or helping with a new transport project. This is where differences occur between the bond markets, as all the money raised from the issuing of a green bond must be used to fund projects that have positive environmental or climate benefits, e.g. renewable energy or energy-efficient buildings. Green bonds are also sometimes referred to as ‘climate’ bonds and, due to their emergence, conventional bonds are now sometimes referred to as ‘brown bonds’. This article will look briefly at some of the details of the green bond market.

The history of green bonds

Green bonds came into existence in 2007, when the European Investment Bank (EIB) created a bond where proceeds were dedicated to renewable energy and efficiency projects. In 2008, after a group of Swedish pension providers decided they needed to be better stewards of the planet, the World Bank issued its first green bond with a nominal of 2.3bn SEK (Swedish krona) and a term of 6 years (International Finance Corporation – World Bank Group, 2016). Fast-forward a few years, and it’s thought that $517bn worth of green bonds were issued in 2021. Since the first green bond was issued, there has been $1.2tr in cumulative issuance (Jones, 2022).

The graph below (ibid.) shows the value of green bonds issued per country in 2021:

The world’s largest issuance was in 2021 when the European Commission launched its first NextGenerationEU bond, which would raise $12bn for eligible investments; these included energy transition in Belgium and the construction of wind farms in Lithuania. Additionally, it is fully compliant with the Green Bond Principles of the International Capital Market Association (ICMA) (European Commission, 2021). The ICMA is an organisation which promotes high market standards, and the Green Bond Principles are a set of voluntary guidelines for companies to follow when issuing green bonds. The core components of these guidelines are as follows:

It should be emphasised that these guidelines are voluntary, rather than legally binding.

As mentioned above, the Green Bond Principles established by ICMA are only voluntary. Similarly, so is the EU’s Green Bond Standard (EuGB), which is in the process of being created and ratified. The aims of the EuGB are:

Maybe these principles don’t need to be legally binding.

The EU has been at loggerheads with China over their ‘clean coal’ bonds (Bloomberg, 2019). ‘Clean coal’ mainly refers to carbon capture and storage, but can also encompass improving fossil fuel efficiency, something the EU and many others don’t think is a valid method of mitigating climate change. Despite China being the world’s biggest carbon emitter, it is also one of the largest green bond issuers (see graph above). Landmark changes took place in 2020 when, after pressure from global investors and the EU, the People’s Bank of China stated they were taking “clean utilisation of fossil fuels” off the list of projects eligible for green bond financing (Weinland, 2022). This demonstrates that if there is enough support from countries and organisations, those less inclined to help mitigate climate change can be influenced, meaning that there may not be a need for legally binding green bond standards and principles. If the voluntary and unratified EuGB standards can still influence a superpower like China, then they are already ensuring that greenwashing is scrutinised at a high level.

On the other hand, greenwashing is a large problem which green bonds and many other markets are facing. Could more be done to stop this?

With $517bn worth of green bonds issued in 2021, a 50% increase from that seen in 2020 (Jones, 2022), it is inevitable that some issuers are going to label bonds as green to cash in on this fashionable market. Back in 2014, a company formerly named GDF Suez (now named Engie) issued a €2.5bn bond, the largest corporate green bond ever issued at the time, to build the Jirau dam in the Madeira River, Brazil, to generate hydropower. Hydropower is a great source of renewable energy, however, in order to build the dam, the company flooded 362 square kilometres of rainforest, causing many indigenous people to lose their homes, and animals their habitats. Moreover, the company has been associated with labour rights violations (Brightwell, 2016).

At first glance, a hydroelectric dam sounds like a great idea to generate renewable energy, but given the environmental damage caused by the project this green bond was not particularly ‘green’ – something that may not have been easy to spot when the bond was first issued. Therefore, should EuGB standards and green bond principles be made legally binding in order to stop investors who genuinely want to help improve the planet being deceived into giving their money to a greenwasher? This issue could, of course, be solved if investors had more information about the issuer’s true intentions, but information on this isn’t always easy to find. The voluntary EuGB standards may be useful for stopping greenwashing on a large scale, like in the Jirau dam example above, but smaller-scale individual projects may still be falling through the cracks. Having stricter laws on green bonds would make it easier for investors and would stop climate damaging projects being funded under the guise of green bonds.

If greenwashing is a big problem, are green bonds helping with the climate crisis?

Oil and gas companies are now starting to issue green bonds. Many people aren’t opposed to this occurring, in principle, as they believe the green bond market is about the asset not the issuer. Indeed, the large amount of capital raised from fossil fuel extractors is arguably needed for a faster transition to a green economy. One such oil and gas company, Repsol SA, issued a €500m ‘green’ bond in 2017 with the capital raised going towards improving the energy efficiency of Repsol’s chemical and refinery facilities, with a goal to reduce greenhouse gas emissions. It was estimated that the bond would stop 1.2 million tonnes (mt) of CO2 being emitted by 2020. Arguably, with Repsol releasing 17.9 mt and 19.2 mt CO2 into the atmosphere in 2015 and 2016, respectively, the 1.2 mt this bond removed barely touched the sides, but it’s a step in the right direction for a large-scale polluter (Whiley, 2017).

Due to the comparatively small amounts of CO2 this green bond was removing from the environment Repsol, perhaps rightly, received a lot of backlash. In 2021 Repsol issued another green bond, this time raising funds for projects such as renewables, biofuels and electric vehicle charging and with payment rates tied to environmental targets (Pronina, 2021), demonstrating how public/shareholder sentiment can influence company behaviour when it comes to projects funded via green bonds.

These Repsol examples illustrate how green bonds are and aren’t improving the planet. Repsol’s first green bond wasn’t very green, and many green bonds out there aren’t as green as they should be, but companies are changing their ways and trying to do better, as seen with Repsol’s second green bond. The increasing popularity of the green bond market demonstrates how companies and society are becoming more environmentally minded.

Oslo-based company Cicero has an interesting theory regarding the green bond market – they believe it is better viewed via shades of green. They classify green bonds into one of the following three categories:

Given the current climate situation the world is experiencing, it would be great if most bonds were ‘dark green’ but this isn’t currently achievable for all companies.

Why do companies issue green bonds?

In 2021, Amazon issued its first green bond, which was raising $1bn for environmental projects such as renewable energy, clean transport, energy-efficient buildings and affordable housing. In the same year, however, Amazon published a report outlining that it held $84.4bn in cash, cash equivalents and marketable securities, making up 26% of its total assets. This begs the question: why did Amazon need to issue the green bond, doesn’t it already have enough money to invest in these environmental projects? This is the case for many green bond issuers in fact – they make enough money so why don’t they pursue these projects themselves without the need of investors, allowing smaller projects to benefit from the investment instead?

A big reason why companies issue green bonds is their public image. Many people and companies are scrutinised these days over their environmental actions and credentials, so issuing green bonds is a simple way for companies to show they do care about climate change, whilst also improving the climate crisis in some way.

Another reason is that yields on green bonds tend to be lower, compared to conventional bonds. A lower yield results in the issuer paying back less money to the investor, meaning green bonds tend to be a cheaper finance method. Different investigations produce different conclusions, but it is thought that, on average, green bonds are 15-20 basis points lower than conventional bonds in primary and secondary markets. There are some differing theories as to why this is the case. One explanation is that investors are willing to accept a lower yield in return for the knowledge that they have helped with the climate crisis in some way. Another explanation is that green bonds offer a lower default probability due to third parties ratifying the bond’s green status. Due to a lower default probability, the bond is more secure and hence offers a lower yield (Kristin Ulrike Löffler, 2021).

Investors who purchase green bonds tend to be ‘buy and hold’ investors, meaning they hold onto their investment for a long time regardless of market fluctuations. This could be because they invested in the green bond to see the long-term benefit their investment would have on the planet. Therefore, they wouldn’t want to sell their bond and not benefit from the knowledge they have helped with climate change.

Lastly, due to the climate crisis we are experiencing, many businesses feel that climate legislation will become stricter as time goes on, with businesses having to publish mandatory climate-related disclosures. Initiatives such as the issuing of green bonds now could benefit businesses in their future reports.

Green bonds are essentially the same as conventional bonds but they must, in theory, be used to fund projects that have positive environmental or climate benefits. However there are currently no legally binding regulations governing the green bond market, with only voluntary guidelines in place. As a result, some green bonds are definitely greener than others.

The popularity of green bonds is perhaps evidence that companies, investors and countries are becoming more environmentally minded. However, the motivations for some companies issuing green bonds are questionable, with some businesses primarily using them to improve their public image and to benefit from lower yields, and investors potentially buying them purely to alleviate their guilty climate conscience.

Greenwashing certainly exists in the market and will likely continue whilst it remains unregulated, which is an unfortunate side-effect of the current popularity of the green bond market. As climate regulation tightens in the future, businesses may be left scrabbling to meet new requirements, which could lead to corner-cutting when it comes to the green credentials of their bonds. Would an entrenched set of EuGB standards and green bond principles help reduce this corner-cutting and hold issuers more responsible, or will the effect of greenwashing outweigh this and allow businesses to continue to invest in ‘green’ projects whilst harming the planet?