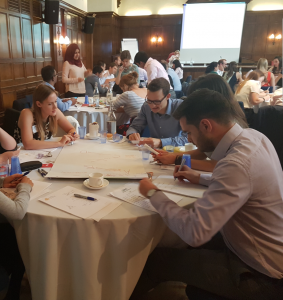 On Thursday 20 July, APR’s James Robinson attended the Evolution conference, the first of the kind organised by the Staple Inn Actuarial Society.  Pitched at nearly- and newly-qualified actuaries, the four sessions focussed on soft skills for aspiring actuaries.

In “Negotiation and Influencing”, delegates learned how to bring others around to their point of view, while addressing common barriers to effective communication.  The speaker emphasised the differences between “push” and “pull” influencing, and also the fine (often disputed) line between assertion and aggression.  Apple’s advertising was described as an innovation in influencing: rather than What-How-Why, ads focus on Why-How-What when inspiring their target market.

During the “Leadership, Management and Delegation” session, there were a number of group activities that demonstrated a wide range of management styles.  We learnt that a good manager assesses their team’s performance-readiness according to specific criteria: Resources, Technical Skills, Soft Skills, and Motivation. 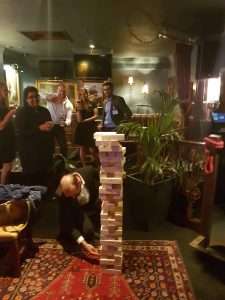 Career Management”, an actuarial recruiter gave delegates a briefing on how to develop their careers.  Key lessons learnt included that actuaries need to be commercially aware, and viewing a career as a series of 5-year chunks.

The final session, titled “Think Outside the Box”, involved a teamwork challenge where actuaries had to solve a distance-speed-time problem using imaginary units.  The challenge was followed by a discussion about individual’s contributions to the task and everyone’s emotional state throughout.  Delegates learnt about the six aspects of creative thinking (Simple, Unexpected, Credible, Concrete, Emotional, and Story-telling).  The main lesson was that it’s important to visualise the potential solution rather than focus on the problem at hand.

The conference was very interactive, with prizes being awarded for the best audience contributions.   Excellent food and drink was provided, and the event was followed by a reception at a local cocktail bar.