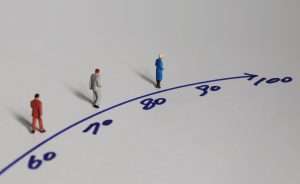 Life expectancy is one of the more interpretable figures used to measure the health and wellbeing in a society: a single number that gives an indication of a person’s expected lifespan. Because of its simplicity, it is a metric that is often referenced when comparing countries or tracking changes in a country’s health and wellbeing over time.

As with most simple statistics, a single metric will rarely tell the complete story, even when tracked over time. Life expectancy, for example, takes no consideration of age, sex, race, socioeconomic background, or lifestyle behaviours. Only by disaggregating the data – that is, filtering by other features and attributes – can we start to piece together narratives about trends in health and wellbeing over time.

This analysis highlights how differences in life expectancy between groups are often inflated in the aftermath of shock events, such as war, famine, or the introduction of new technologies. By disaggregating life expectancy figures in different contexts over time, it becomes clear that shock events can result in markedly different life expectancy outcomes for different groups of people.

Unless otherwise stated, all life expectancy figures in this analysis are taken from the World Bank’s World Development Indicators (WDI) records [1].

Actuaries and those familiar with life tables will perhaps be unsurprised that one of the primary considerations when disaggregating data is biological sex. Around the world and throughout time, women consistently experience higher life expectancies than men. A single aggregated life expectancy statistic is inadequate to capture this discrepancy. 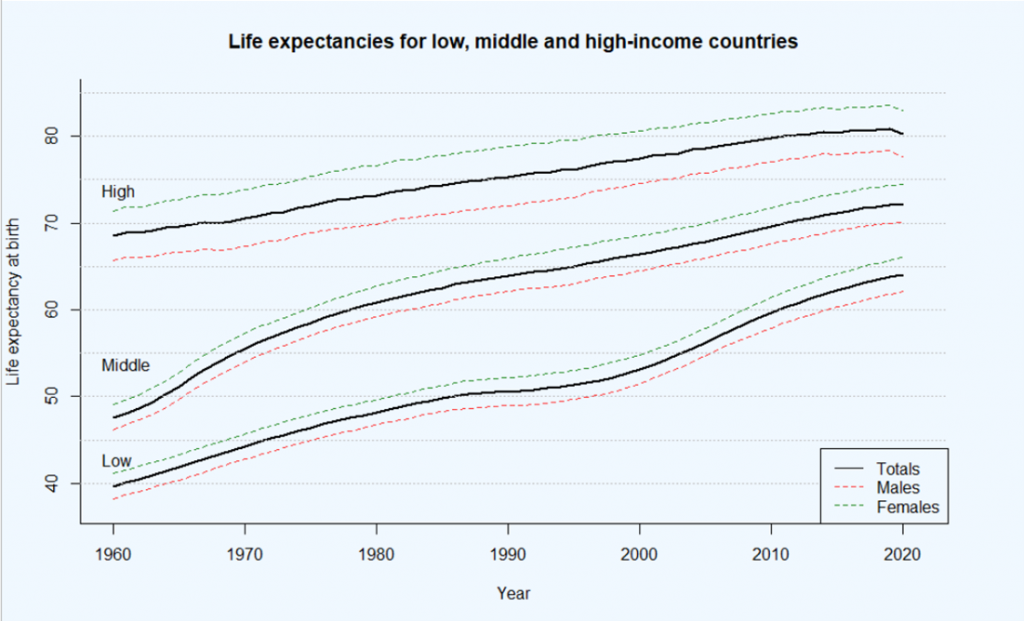 The scientific reasons for biological women outliving their male counterparts can be explained in large part by hormonal differences and slight differences in immune systems [2]. Biology, however, is beyond the scope of this article (and indeed its author). There are, however, other key factors to consider when reviewing variations in life expectancy trends. 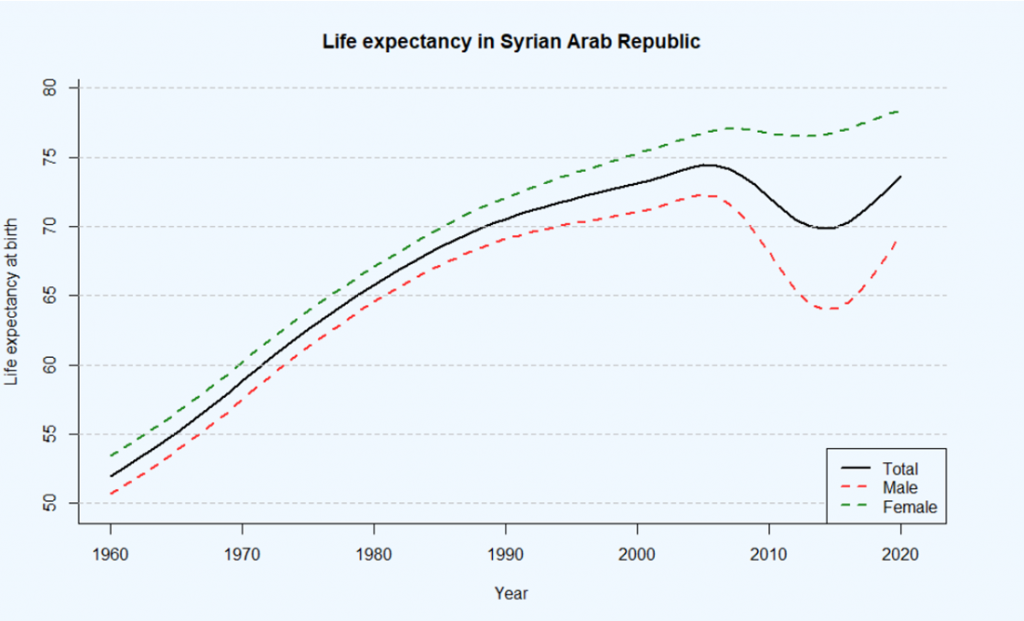 When the war in Syria reached its zenith in the mid-2010s, life expectancy for both sexes decreased, but the decrease for males occurred on a much greater scale than that for females. There are similar trends present in data from Iran, Iraq, and Croatia during periods of war in each country – armed revolution and war rarely bodes well for anyone, especially those holding the weapons. This is not to discount the role of women as victims of conflict, and one likely reason for this discrepancy is the increased rates of displacement for women and children during wartime. It is clear, however, that decreases in life expectancy due to war do not occur at the same rate between women and men.

One gruesome exception to this trend is genocide. Although perpetrators of genocide are overwhelmingly male, women have not been spared the ensuing brutality [3]. In both Rwanda in the 1990s and Cambodia in the 1970s, the bloody toll of genocide was enacted on men and women equally, and disaggregated data reflects this. 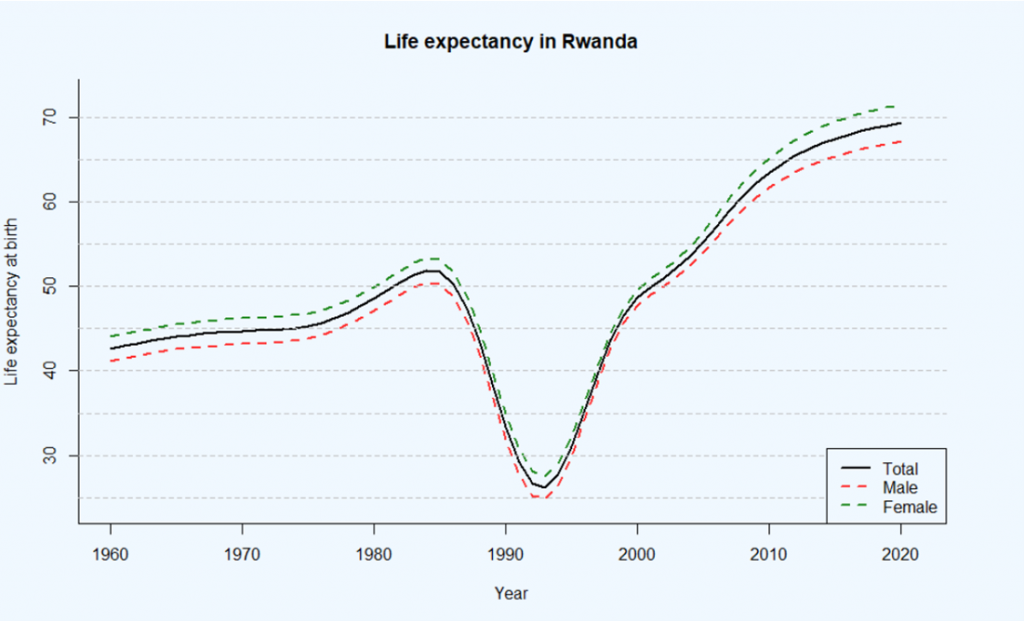 There have been genocides in history – usually on a smaller scale – where men and boys have been specifically targeted. The largest such massacre – the Srebrenica massacre during the Bosnian War – is a globally recognized genocide resulting in the deaths of 8000 Bosniak men and boys. For this reason, and the fact that the Srebrenica massacre was part of a larger conflict in which many women and children were displaced rather than killed, disaggregated life expectancy data for Bosnia and Herzegovina does not mirror the trends seen in Rwanda and Cambodia. Rather, it reflects the trends observed in other war zones: life expectancy estimates decrease more for men than for women.

Impact of Contraceptive Use 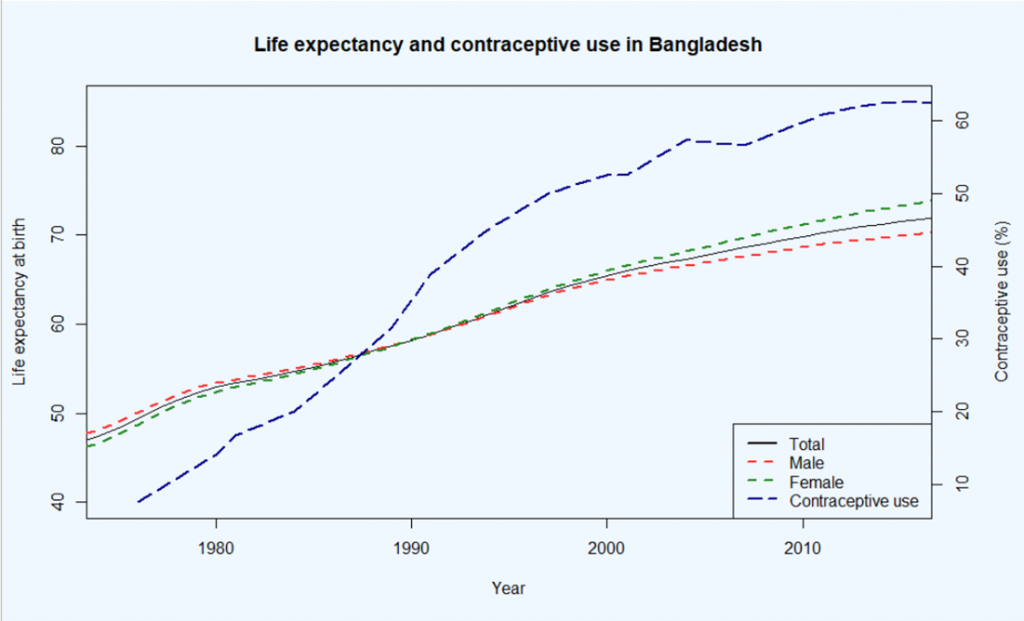 In a hard pivot from the brutality of war and genocide, Bangladesh provides a slightly more uplifting case study. Bangladesh is one of the few countries that, until the 1990s, had higher life expectancy for males than for females. The reasons for this are not entirely clear until one considers that Bangladesh is also a global success story when it comes to increases in contraceptive use and female education rates. Prior to the 1980s, birth rates, childhood mortality, and maternal mortality rates in Bangladesh were above global and regional averages [4]. The introduction of community-focused contraception in the mid 1980s resulted in reduced maternal and infant mortality rates, which not only resulted in across-the-board increases in life expectancy, but also in female life expectancy surpassing male life expectancy.

Underlying mortality rates, however, are much more revealing. They highlight which age groups have seen the largest improvements in survivorship, and during which time periods.

For this illustration, mortality data – the number of deaths per 1000 individuals – were taken from England and Wales from 1915 to 2015 [5]. For comparison, life expectancy in the United Kingdom increased from 52.02 to 80.87 years during this period (WDI). 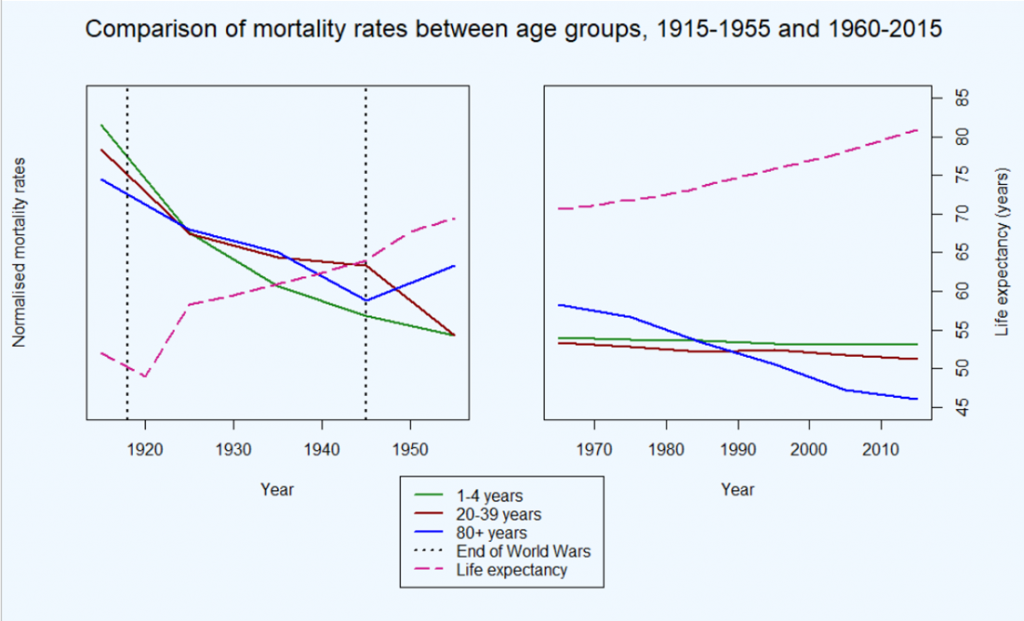 The most precipitous drop in mortality rates prior to the second World War was among very young children between the ages of 1 and 4, which is a good indication that increases in life expectancy prior to 1945 were driven by decreasing childhood mortality rates. Mathematically, this makes sense, as even a relatively small number of individuals dying at a young age has the effect of lowering life expectancy a significant amount. This trend also reflects the impact of advances in public health and medicine on infant and childhood mortality.

This graph also illustrates the effects of war on life expectancy. The overarching trends in mortality rates for the youngest and oldest individuals are mostly unaffected by the end of war – but the mortality rates for young adults (age 20-39) drop sharply after both 1918 and 1945. These drops coincide with noticeable increases in life expectancy, which is a good indication that increasing life expectancy in those time periods is not only due to the country’s oldest individuals living longer, but also the increased survival of its young adults after wartime.

As shown in the second plot, since 1960, the mortality rates for individuals 80 years and older have seen the most noticeable relative decrease, which is a good indication that more recent increases in life expectancy are attributable almost entirely to the nation’s oldest citizens living longer.

Unfortunately, comprehensive mortality data were not readily available prior to 1915, and the above timeframe does not include COVID-19 data. In general, one would expect higher than normal mortality rates during pandemics, such as COVID-19 or the Spanish Flu. Indeed, the increases in life expectancy between 1920 and 1925 are most likely due to both the end of World War I and the end of the Spanish Flu outbreak. What life expectancy does not show is which age groups are primarily impacted by disease. Mortality rates for COVID-19 patients, for example, are 50 times higher for individuals aged 70-79 and 90 times higher for those aged 80+ compared to aggregated data [6]. Life expectancy measures around the world in 2020 and 2021 do reflect the impact of COVID-19, but do little to shed light on which populations are at highest risk [7].

Life expectancy is a vital metric and should continue to be used for its clarity and ease of comparison. That being said, a single metric will always have limitations. Life expectancy by itself hides historic trends in data that could give valuable insights into which populations might be most affected by future shock events. Disaggregating data and considering alternative metrics allows for a more thorough and informative analysis.

Disaggregation by sex and age are only two possible considerations for analysis. Race, religion, socioeconomic status and education are other factors that might affect life expectancy figures. Considering the diversity of factors impacting life expectancy is not only enlightening; it is also imperative to allow for better allocation of resources in the aftermath of shock events and technological developments.

[3] Amy Randall, Genocide and Gender in the Twentieth Century: A Comparative Survey 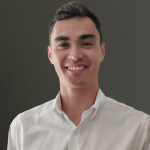