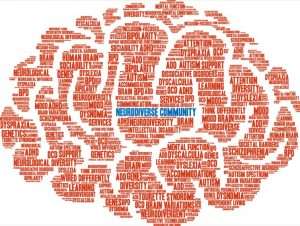 Essentially neurodiversity is a term used to explain the variation of brains in a population of people. Just as a random group of people might have different hair colour, eye colour, skin colour or even the ability to make one’s tongue roll, there are people in that group whose brains work intrinsically differently. Now you might be thinking doesn’t everybody think differently? Yes, to some extent they do, and part of the human condition is to feel individual and to have one’s own thoughts, opinions and processes, but by and large a sizeable proportion of people are reasonably similar in their thought processes and behaviour. This then leaves us with the so called neurodivergent, the real subject of this article. These are people whose brains work in a different enough fashion that the traditional way of seeing, learning and general being in the world doesn’t come naturally to them or perhaps never will.

Who are the neurodivergent?

Some examples of neurodivergent peoples include a dyslexic person, who would classically look at a page of words and see something very different from what you or I may see, a dyspraxic person who may struggle with their coordination, and a person with attention deficit (hyperactivity) disorder (ADHD) who could find concentrating for long periods of time difficult or find themselves acting impulsively. These are by no means intended to be exhaustive lists; there are many, MANY more forms of neurodivergence, and the ones I have briefly described are themselves complex and varied. There are so many neurodivergent people that it is estimated that up to one in seven of the population could fall into the category. The key theme for all of the different types of neurodiversity is that it is the brain either receives information, processes information or acts on this information in particularly unique ways, to the extent that it can be extremely hard to understand (even for other neurodivergent people) how these people see the world.

There is a note worth saying here that mental health conditions (such as depression, anxiety, schizophrenia etc), whilst in many cases are very linked to neurodiversity (this is particularly true for me personally) and are included in the umbrella term of neurodiversity, won’t be covered here as they are worthy of an article in their own right.

Neurodivergence in the actuarial world

From a general outlook on the world of work any form of varying views or ways of thoughts when solving problems or achieving certain goals is incredibly positive and useful to have in the workplace. Creativity is born from difference and having somebody whose brain works in a scientifically obscure way is a great way to achieve this difference. It is not only a case of having a different pair of eyes on a problem, but you are receiving a completely different set of skills working on this problem as well.

To go a little more in depth into one type of neurodiversity – autistic people: many autistic people tend to have an extremely logical brain and an ability to concentrate for hours on end on something that interests them; you can’t help but feel was made for actuarial work. The logical dominance of their brain lends itself nicely to most mathematical fields and the ability to stare at a spreadsheet or database for an extended period of time can’t hurt either!

The reason neurodiversity is important to me is that I am not particularly ‘normal’ myself – it is rather apparent to both myself and those who know me well that I share little in the way of ‘normality’. When I use the term ‘normal’ I do so with inverted commas as I don’t personally believe any true ‘normality’ exists, nor would I want it to as variety is interesting. The specific type of neurodiversity I present is autism, one of the types that was previously labelled as Asperger’s syndrome.

To be even more specific I am a type 2 autistic person which is the autism most commonly found in females. Essentially it is an autistic person who is intelligent or has a high level of empathy (it is this second part that psychologists believe makes it more prevalent among females and makes them harder to diagnose) but for whom social norms do not come naturally. This allows them to go largely undiagnosed in general life as they use this intelligence and empathy to compensate for something everybody else already has. During my very recent diagnosis the analogy used was this: imagine watching two people in a pond, both seemingly comfortably floating on the surface with their head above water with no real difference between them, but if you peer under the water line one is naturally floating, the other is making a real meal out of it and flailing about attempting to stay afloat. As you can imagine this flailing is really rather tiring and unsustainable in the long run, which leads us to another characteristic that people with autism commonly present and that is burnout. Autistic people who generally cope fine day to day and you would be surprised to know they were autistic (which I think I fall into, a few of my APR colleagues have also confirmed as much) expend so much energy in social situations that after an extended period of time they have no energy left and breakdown. This explains the gaps in my professional and academic career particularly well. For these time periods it would be fair to say I almost ceased to exist, my personality was almost completely lost by my brain being preoccupied struggling to process all the information it had received in that time – to use a computer analogy I had run out of RAM.

Another way my autism has presented itself throughout my life is I have always been somebody to lend an ear to people’s troubles (this is almost akin to ‘research’ as I attempt to understand how other people view the world) whilst simultaneously putting my feet in it constantly. Thankfully I am learning to hold my tongue more as I age but as I’m sure a few of my APR colleagues can attest, this characteristic hasn’t completely left me yet. However, if I was being honest, I wouldn’t want it to. I take pride in the slightly odd way I view the world, I believe that this different viewpoint means I can be both insightful and quite funny (sometimes) and that people appreciate having me around, although realising that last part is unfortunately a recent revelation.

I am only a short way into my actuarial career, having started in September of last year, but I can notice the benefits to my ‘disorder’ in the work I have done in that short space of time. I have been able to absorb information well and, to be corny, numbers have always made sense to me in a way people still don’t. Oddly enough, the timing of lockdown was rather perfect for me as it coincided with the beginning of my career. This means I have been able to work from home whilst finding my feet, so the change in my life was not as large as it could have been otherwise (change is something autistic people find notoriously difficult). Managing burnout and professional courtesy will still be a personal challenge going forward, but I think I have developed the tools in both recognising and handling these issues, and along with APR’s exemplary managing of me thus far, I believe I am well on my way to a long and fulfilling actuarial career.

What can you do?

What should you do if you come across a person in the world of work presenting as, or who has told you they are, neurodivergent? Two words. Be mindful. It is not a case of having to feel on edge or act especially differently when dealing with them, but just keep in mind that your experience of the situation you are currently in versus their experience might not be aligning very well. Providing space and time for neurodivergent people to process things they are struggling with will be intensely appreciated and a great way to cultivate a very positive working relationship with them. Not everything needs to have an adjustment readily prepared. Say if you are planning a meeting you wouldn’t need to have something in mind when originally organising the meeting, but just be open to input or suggestions from your attendees. Issues could include location or timing and you can aid colleagues by cultivating a work environment whereby the people you are working with know there is a channel to voice concerns in that will be taken seriously and with empathy. But in general if you ‘be mindful’ you won’t go too far wrong.