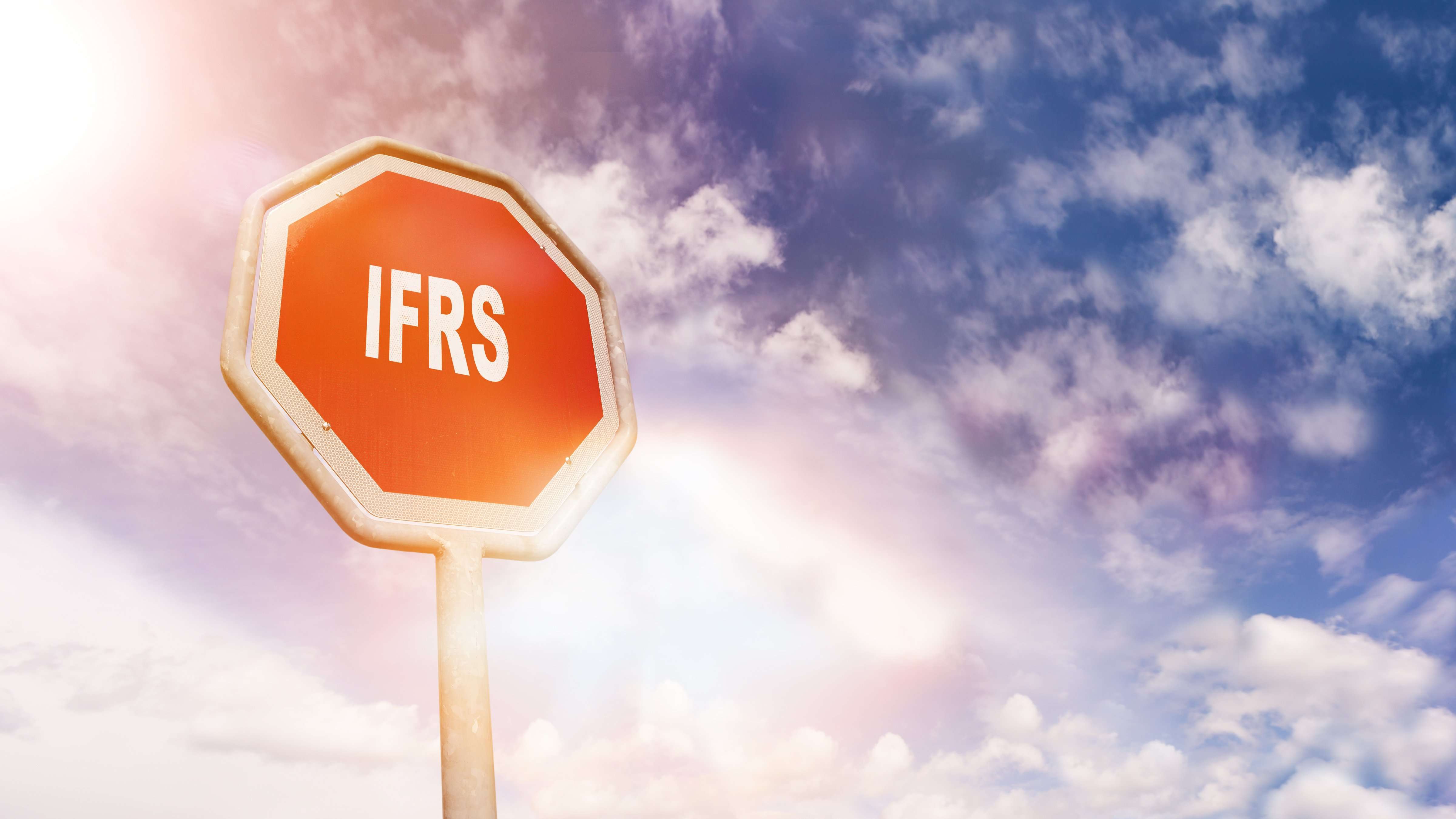 Oh, hello again. I see you’re still dangling from that cliff edge we left you on last time. I do hope you’ve been thinking about our discourse on the CSM while you’ve been down there! I’ll just pull you up – there we go – and we can have a nice long chat about the Risk Adjustment.

Food! I need food! I’ve been living on rainwater and lichen for a month! But…the Risk Adjustment eh? That DOES sound interesting.

Here’s a bag of crisps. Now, pipe down and listen up.

You’ll be familiar by now with the building blocks approach. Last time we looked at the Contractual Service Margin – the CSM to its contemporaries; the Risk Adjustment (affectionately, the RA) is another such block making up the total liability that insurers hold. It is designed to cover the usual variability of future cash flows around the best estimate over the lifetime of a product.

I don’t have time for long-winded introductions, I think I might be going into shock.

Quite. Here are the basics:

Talking about IFRS17 always calms me down. The RA sounds a little like the Solvency II Risk Margin?

There are similarities, as we shall see. However, don’t forget, the IFRS are put in place to ensure proper reporting, not solvency, so the big picture purpose of the RA and the SII Risk Margin are very much distinct.

Having said that, interestingly it is actually acceptable to simply set the RA equal to the Solvency II Risk Margin. However, the design of both the Risk Margin and the Matching Adjustment have been criticised for being too generic and not representing the economics of any one business. Since the risks included in the RA, as well as the confidence intervals used, are up to the insurer, the RA can reflect an individual business’s circumstances. It may therefore be seen as a welcome reporting figure by businesses, if it is truly representative of the business.

Another distinction between the RA and the RM is policy grouping. Under IFRS, the RA is applied across groups of policies with similar characteristics. Grouping of policies is an important IFRS concept so here’s a summary:

At this point, each policy belongs to a group, and the RA is applied to each group separately. Note that these groups are different from the policy groups used in SII, which is a big part of why the analysis of the SII SCR, Risk Margin etc, is not directly applicable to IFRS17, and requires some manipulation.

Despite the above, the SII Risk Margin is at least a more suitable proxy for the RA than the SCR is. This is because the RA should be higher for contracts with longer durations.

Got it. Is there anything else I should know about the RA then?

There is always more to learn. Now that you have a broad idea of the purpose of the RA, I shall take you through the characteristics it should show.

Imagine that contract X is an insurance contract. The risks and other characteristics for contract X have been assessed, and used to calculate its RA. It is desirable that making the changes listed below to contract X should increase the RA.

I should repeat that it’s also desirable that, as time passes, the RA should be reduced. This is because there is less scope for future uncertainty.

You’ve talked a lot about the RA being calculated – how is this done in practice?

. There are three main calculation methodologies companies could use to calculate the level of RA they should be holding, and the idea is that the company should use their judgment when deciding on which to use. As we’ll see, the method used should depend on the portfolio and the outcome distributions themselves, suggesting there is no ‘preferred’ method. However, it may be that the industry comes to prefer a certain method with time.

We’ll go through the options here for the technically minded of you or you’re welcome to skip to the next section – we won’t tell anyone.

This calculates the RA as the:

Minimum increase in the expected liability that is not exceeded with:

The VaR RA will then be something like “the value of the increase in liabilities that you won’t exceed in x% of situations over a period of y years”.  VaR is similar to finding the lower x% cut-off point of a normal distribution.  The confidence level itself is not prescribed and is left to the judgement of the insurer. However, since the confidence level must be disclosed, it seems likely that the market will converge to a common standard.

If you feel a sense of déjà vu stealing over you, it is because this is basically the Solvency II SCR method. Of course, the SCR method has a prescribed confidence interval of 99.5% over a one-year horizon, but it is not inconceivable that firms may wish to adapt their SCR calculations to use for the RA. They would of course need to adjust the confidence interval used, and possibly adapt their model to consider more than the one time period that the SCR considers. As always, care must be taken when using models for anything other than their originally intended use.

VaR considers all the events in your confidence interval, but nothing more. However, you’ll remember from our list of desirable characteristics above, that events which are very unlikely, but very serious, should increase the RA held. VaR won’t meet this criterion – but fear not, CTE to the rescue!

CTE increases the RA by the:

This method is often chosen where outcome distributions are skewed, have fat tails or are non-normal, since it will account for the potentially large losses which occur outside your confidence interval.

For a given confidence level, the CTE will give a higher RA than the VaR, since it takes some account of the liabilities above the 99.5% mark, rather than just taking the 99.5% value. So, this is a more prudent method, provided all else is equal. 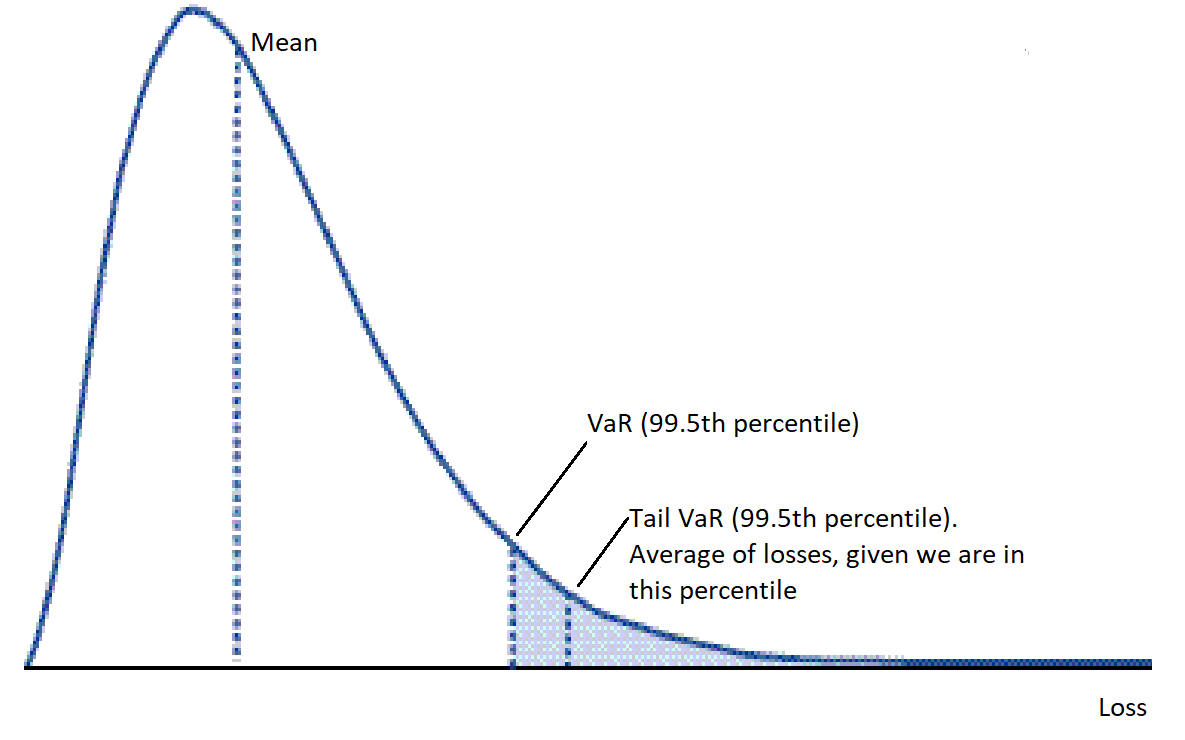 Diagram illustrating the Conditional Tail Expectations, or Tail Value at Risk. It is the expected loss given that we are in a given percentile.  (OK, so it’s not as fancy as our usual graphs, but hopefully you get the picture…)

This method is distinct from the other two we have examined, but similar to the one used to calculate the Risk Margin in Solvency II. The cash flow losses at a chosen confidence level are calculated and adjusted for the time value of money. This capital amount is then multiplied by a cost of capital rate (to account for the lost opportunity incurred in having to hold extra capital). This may be chosen by insurers who wish to use their work on the Risk Margin to calculate the Risk Adjustment, although as we have discussed above it may not be appropriate.

You mentioned that confidence intervals are not prescribed?

Well remembered. The insurer does have a choice here. It might be that many choose to use a 99.5% interval in order to lift some of their calculations directly from Solvency 2 analysis. Of course, it’s not nearly that simplistic, and there are a few things to consider when setting confidence intervals and deciding how many of your SII calculations to use.

I think I’m getting it. You said you’d tell me about the allocation between CSM and RA.

The release of the CSM and RA are ultimately what generates the profits. If one is increased, the other decreases. As you pointed out earlier, this means it may not matter how much is assigned to each of the CSM and RA, if they are expected to be released at broadly the same rate.

However, profits are released in line with insurance coverage (from the CSM) rather than risk exposure (as it would be from the RA). One might expect that as insurance coverage decreases, risk exposure will decrease at the same rate, but this is not always the case. Hence, if the pattern of release from both building blocks is expected to be different, the insurer may prefer to have more of a CSM and less of an RA, or vice-versa.

Ultimately, the amounts in the RA, CSM etc will affect the company accounts. The company may therefore wish to choose a method which presents a particular picture in the accounts.

That all makes sense, but now I’m flagging. Any chance I could go home and let my family know where I’ve been for the past month?

Sure thing, champ. A quick roundup then: