Gilt yield movements – why the BoE had to intervene 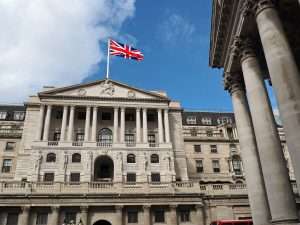 This article summarises the recent movements in gilt yields, covering the Bank of England (BoE) intervention and the impacts for different market players.

On Friday 23rd September, the new Chancellor Kwasi Kwarteng announced a set of economic policies, referred to in the media as the “mini” Budget. As prime ministerial candidate, Liz Truss ran with pledges to cut taxes and to propose bold policies for economic growth.

Kwarteng’s statement put forward greater tax cuts than expected – £45bn worth – with funding coming from borrowing. This was announced against a backdrop in which the markets felt that the government may have side-lined key institutions of accountability, by declining accompanying economic forecasts from the Office for Budget Responsibility (OBR), and by removing the Permanent Secretary to the Treasury.

The announcement was seen to have triggered a sell-off of UK assets, with some investors concerned by the approach to fiscal policy, resulting in some severe financial market movements.

With interest rates on the rise, gilt yields rose significantly with the prospect of a surge in government borrowing. 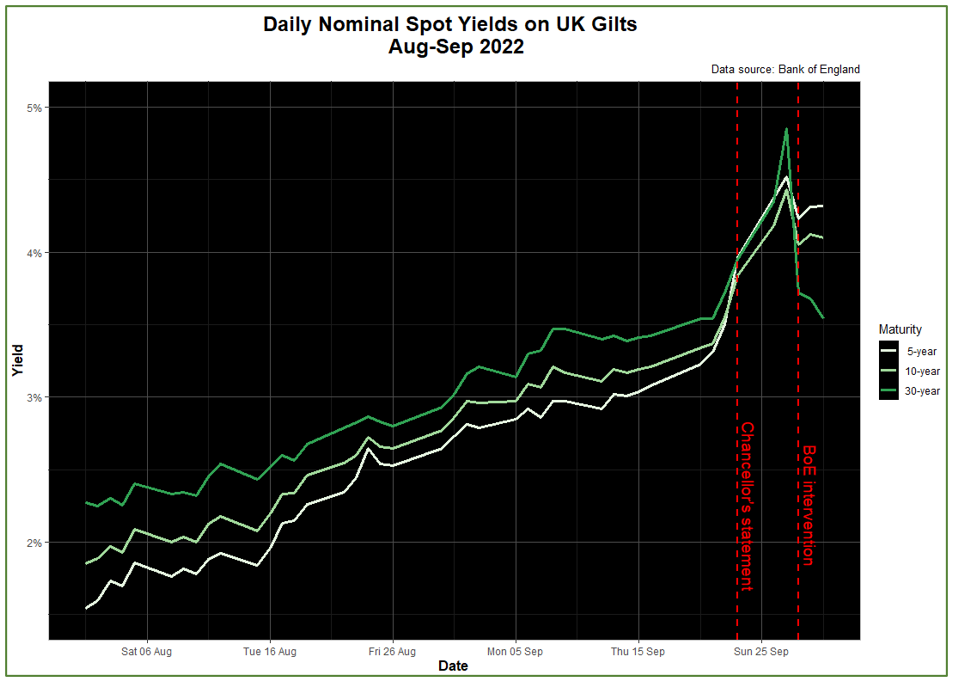 Pound sterling fell below 1:1.11 with the dollar for first time since 1985, and slumped to a historic low of 1:1.0384 on Monday 26th September[v]. The spread between daily high and low GBP:USD exchange rates significantly widened. 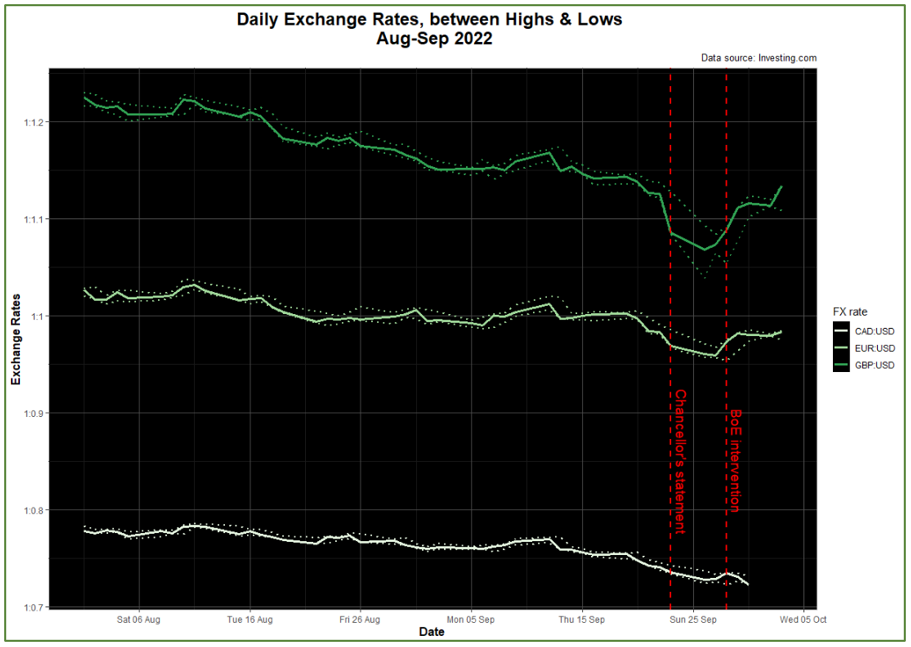 It is unusual for a developed country’s currency to weaken in tandem with government bond yields rising sharply. The volatility in the value of pound sterling has increased dramatically for a historically stable currency.

Plots of pairs of different market variables show some new behaviour, indicating that we may be moving into unforeseen economic territory. For example, the chart below plots the 1-year change in 10-year spot gilt yields against the 10-year spot gilt yield at the end of each 1-year period – monthly points are selected from 1971 to August 2022, and corresponding daily points are plotted for September 2022 (ZC = zero coupon). We observe a broad pattern of diagonal bands for past economic phases, and note that recent observations move into a more extreme position. 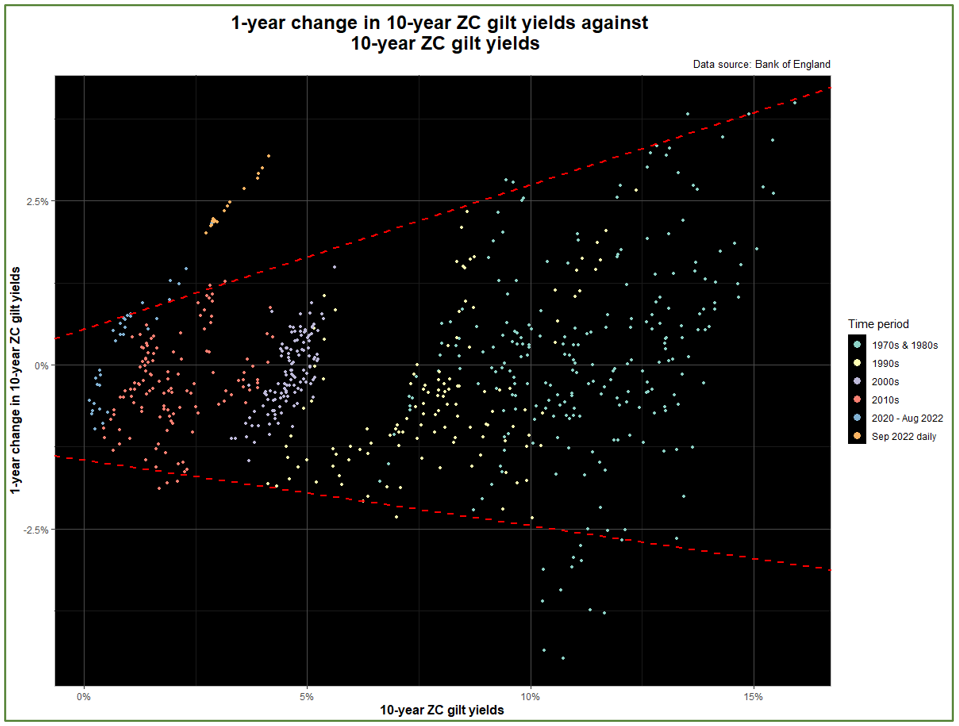 On Wednesday 28th September, the Bank of England (BoE) intervened in the gilt market, announcing it would buy large quantities of long-dated gilts (initially up to £65bn (maximum of £5bn per day across 13 working days, 28 Sep – 14 Oct))[vii]. It stated that this was in line with its financial stability objective, with severe stress among UK defined benefit pension schemes reported in the media as a prime driver of this BoE action.

Why did the Bank intervene?

In the early 2000s, UK defined benefit (DB) pension schemes typically held portfolios composed largely of equities and bonds, along with some real estate and cash. However this left them severely exposed to the downward movements in interest rates that occurred in 2008.

Some schemes moved away from equities into more long-dated bonds to improve cashflow matching, but not all schemes followed suit, as some trustees and sponsors were reluctant to give up the potential gains on equity returns. This led to a rise in liability-driven investment (LDI).

In its simplest form, LDI is a strategy of designing a portfolio with substantial holdings of equities and other growth assets, with the remainder built using large derivative positions and cash, so that it is well matched for interest rate and inflation exposures. For interest rate exposure, typically a DB scheme would enter into swap positions, paying long-dated floating rates and receiving long-dated fixed rates. Such LDI strategies have enabled DB schemes to create the long portfolio durations needed to match pension liabilities without having to relinquish the returns on their growth assets.

Such strategies generally worked well whilst interest rates were stable or falling. But in times of rising interest rates, such swaps move into severe liability positions, and the DB scheme will be required to post escalating amounts of collateral to the clearing house or swap counterparty. For some schemes, the collateral demands were reaching hundreds of millions of pounds to keep their derivative positions intact[viii].

Collateral is normally in the form of cash or high-quality government bonds, but when interest rates are rising, gilt values are falling. Updates to collateral will need to be made daily, to reflect both the increasing swap exposure and the falling value of collateral assets. In extreme cases, if a scheme does not post sufficient collateral in time, it may be in breach of the swap agreement, potentially triggering legal action by the swap counterparty.

During the turbulence after the Chancellor’s statement, DB schemes experiencing pressured margin calls could make their position more resilient by selling gilts for cash, avoiding further falls in collateral value. Because long-dated government bonds have the greatest duration and interest rate sensitivity, DB schemes would naturally sell long-dated government bonds first. As DB schemes are major holders of such assets, this caused a supply-demand imbalance and the sharp rises in yields shown above. This brought more pressure on DB schemes from increased collateral requirements and reduced collateral values, and a spiral took hold, until the BoE intervened.

The BoE’s action was appropriate to restore order and liquidity to the gilt market, and also to avoid a liquidity crisis in the UK DB market, which manages approx. £1tn of assets on behalf of circa 17 million beneficiaries[ix].

While DB schemes were the market participants publicly highlighted as being impacted in this crisis, there are impacts across UK insurers as well, extending beyond their role as sponsors of their own staff pension schemes. For example:

The large gilt yield movements observed during this period will have low associated probability of occurrence in some firms’ Solvency II internal models (IMs), even over a 1-year time horizon. Pressure to revisit calibration approaches is likely to be high.

The accuracy of short-term solvency monitoring built using proxy models may have been under major pressure during these market movements, particularly as a period of reduced model accuracy coincided with a period of intense short-term decision-making.

Analyses of change for Q3 2022 across most reporting measures are likely to be more challenging to deliver to expected standards than previously.

UK life insurers have used a variety of hedging strategies for many years.

Any hedging strategy that assumed future market movements would be smooth rather than moving in sharp jumps is likely to have suffered deteriorated performance and gap risk.

Many UK life insurers use interest rate swaps for duration extension purposes, and this will have exposed them to similar challenges over collateral as for DB schemes.

A matching adjustment (MA) insurer that makes heavy LDI-style use of swaps could have faced intense pressure in recent days, particularly if it already held an elevated proportion of its assets in illiquid private assets, which are not usually acceptable as collateral.

While different insurers will have suffered different challenges over collateral, it is likely that the liquidity contingency plans of multiple UK life insurers have been subjected to a much more severe real-world test over the past 10 days than at any other time since the Solvency II regime came into force.

While the live market movements indicate that the BoE’s temporary intervention last week was successful in stabilising the immediate stresses in the gilt and DB markets, it seems likely that the next few weeks may be characterised by further shocks and stresses, depending on the UK government’s announcements over wide-ranging reforms.

Interestingly, and on a more positive note, as of the end of October 4th the BoE had only purchased £3.7bn of long-dated gilts out of a possible total purchase across these first five workings days of £25bn[x]. It purchased an average of £1.2bn per day across the first three working days but then only £22m on October 3rd and nothing whatsoever on October 4th. This suggests that only moderate intervention was needed to prevent severe market disfunction, albeit the potential size of the intervention would no doubt have helped market sentiment.

The stresses on DB markets have also brought into focus the role of The Pensions Regulator (TPR). Some market commentators are calling for TPR to ban DB schemes from using LDI strategies[xi]. A spokesperson for the Commons Work and Pensions Select Committee confirmed that they would be writing to the TPR, indicating a potential upcoming probe by MPs[xii]. 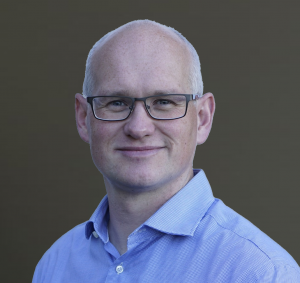