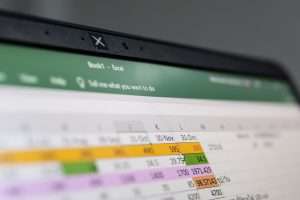 Despite the rise of programming languages such as R and Python in actuarial circles, Microsoft Excel remains a key tool in many actuaries’ arsenals. In part, Excel’s continued widespread use is a result of an almost universal familiarity across the industry of Excel workbooks and their in-built functionality.

The complex formulas present in many actuarial spreadsheets, often copied and pasted multiple times across different worksheets, are a common cause of spreadsheet error and make it difficult for auditors or other users of the spreadsheet to establish the purpose of the function. Microsoft’s recent announcement of the new LAMBDA function in Excel, which allows the user to create their own reusable Excel functions, goes some way towards addressing these concerns.

Background and a simple example

Until now, Excel has only allowed users to create custom functions through another coding language such as VBA or JavaScript. There are two main limitations with this approach. Firstly, it required the user to learn the required syntax to code in another language, and secondly some organisations limit the use of macros or scripts in Excel workbooks for security reasons.

The LAMBDA function avoids these two limitations by allowing users to create custom functions directly within an Excel workbook using the standard Excel formula language. To investigate the power of this new function, here is a simple example.

Consider a table of exam results for a group of students who all sat two papers. Grades are awarded according the following system:

Good coding practice would assign the grade boundaries of 40 and 70 to a named range in the worksheet, however we can ignore that for this simple example. In order to calculate the grade for all students, this formula can be copied down the cells in column C. 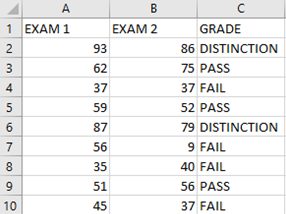 Although this formula provides the required answer, there are a couple of limitations with this approach. Firstly, another user of the spreadsheet may be unclear about what this formula is calculating. Secondly, if the underlying logic of the formula needs to be changed (for example the grading rule was changed so that a distinction grade was instead awarded when the average mark was above 70), then this change would need to be replicated everywhere the formula appears within the workbook. This can be a significant issue if the formula is repeated multiple times across multiple sheets as it can be both time consuming to rectify and there is a likelihood of missing out some occurrences.

The LAMBDA function provides an alternative approach to this problem. A custom function called EXAMGRADE can be created within Excel’s Name Manager (which is available in the Formulas tab). The required function can be defined as a LAMBDA function in the “Refers to:” box giving sensible names to the input parameters.

The required syntax for a LAMBDA function consists of a list of required parameters, in this case the two exam grades, followed by an expression that calculates the required output. Name Manager allows the user to choose the scope of their custom function. Each custom function can either apply throughout the workbook or just an individual sheet. Once saved in Name Manager, using EXAMGRADE will now call the user defined function.

Entering =EXAMGRADE(A2,B2) into cell C2 will now output the exam grade for the first student and this formula can be copied down column C as before. Adopting the LAMBDA function approach is both clearer for other users of the spreadsheet and helps prevent formula errors. The name of the function gives other users a better idea of what the function is aiming to do and they can still access the underlying logic by accessing Name Manager. Furthermore, if any changes are required to be made to the function, then changing the definition of the function within Name Manager will alter all occurrences of the EXAMGRADE function within the spreadsheet.

In addition to allowing users to define their own functions, the LAMBDA function also allows the creation of recursive functions. This opens up the possibility of creating functions in Excel that perform tasks that were previously only possible through the use of a script. Recursive functions can be created by calling the function within the definition of the function itself. For example, define INTSUM(n) in Name Manager as 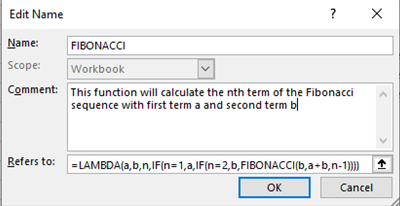 Alan Turing’s work in the 1930’s showed that given a finite set of rules (or states) a Turing machine is able to compute the result of any equation that it is possible to compute.  Each state sets out a series of actions for the machine to perform. For example, state 1 could give the following instructions:

The LAMBDA function can then be called again, within the definition of the function, using these outputs as new values for the input variables. The recursive nature of this function will continue this process until reaching a stop state where the function will output the value of the tape.

Currently, the LAMBDA function is still in development, available to beta testers of Microsoft 365. As such, there are still some areas which could be improved. Although Name Manager provides a convenient place to store custom built functions, Name Manager was not designed with this purpose in mind and there could be some improvements to the way custom functions are defined and a way of separating LAMBDA functions from other named ranges.

Additionally, when typing a formula into Excel’s formula bar, Excel’s Intellisense help box appears to autocomplete function names and shows the required arguments for built in functions. Currently, Intellisense will autocomplete the name of a LAMBDA function, as it does for other named ranges, but does not provide the user with a list of required arguments for the function. This might not pose too much of an issue for the designer of the LAMBDA function, however other users wishing to make use of the function may benefit from this. Furthermore, there is no current way of easily sharing custom functions between different workbooks.

However, putting these minor issues aside, LAMBDA functions significantly increase the power of the Excel formula language, they allow the user to perform calculations in Excel that would previously have required running an external script in VBA or Java. While other programming languages such as R or Python may have certain advantages over Excel, Excel is more widely used and understood within the industry and so the LAMBDA function is likely to gain traction within the actuarial community as this new feature is rolled out more widely.