Celebrationsgate – A Bounty Of Bias 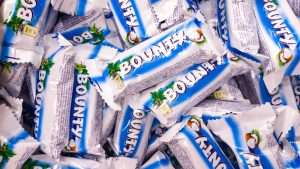 Christmas Day 2022. You are lying on your sofa, post Christmas feast, unable to move. That is, until, you see the beloved Celebrations tub lying just inches away from you, on the living room table. You muster up your last ounce of festive energy to pull the tub towards you, hoping to reach in and find your favourite sweet – the beloved coconut treat Bounty.

Instantly you panic. Where is that familiar blue, white and green wrapper? You dig and search and scream and cry as you cannot find a single Bounty in the tub. Your family notices your anguish and asks if you are OK – how could you be? In one devastating glance, you finally find the answer to why your favourite sweet could not be located – it’s not that a fellow Bounty fan got to this tub before you, instead this is a limited edition “No Bounty” tub, where instead of being in the tub, the chocolate has already been thrown in the bin. You fall to your knees in disgust. Despite all you have eaten that day you are left starving – no longer for the truth, but for Bounty.

And this is a hunger that will never be satisfied.

How did we get here?

This year, Mars Wrigley announced that they would be releasing “No Bounty” versions of Celebrations tubs just in time for Christmas. The reason behind this is, according to a study conducted by Mars Wrigley, 39% of consumers polled wanted Bounty gone from the tub. More shockingly, 18% of those surveyed said they would feel irritated if they opened a tub to only find Bountys were left, and a whopping 58% said this would lead to a family argument![1]

So it is clear the Bounty is a controversial figure – but does it deserve its cancellation? From the figures above it is clear the treat can cause incredible anguish, but I think the key figure is that 39% want it removed – this is not a majority of the 2,000 respondents polled! Despite this, Mars Wrigley seemed happy to use this as justification for their decision… and now we get to the heart of the issue. This raises an issue we have all encountered in actuarial work – the issue of bias.

As you can probably tell from the tone of this article, this is going to be a fairly light-hearted festive take on the issue of bias. If you’re looking for a more serious viewpoint, may I recommend this excellent article by my colleague Muj[2]. As he explains, there are many types of bias, but most important of all in relation to Mars Wrigley’s decision is confirmation bias. This is the “tendency to process information by looking for, or interpreting information that is consistent with one’s existing beliefs”[3]. The 39% wanting Bounty removed figure from earlier isn’t enough justification to remove the sweet, but the survey continued to ask questions where Bounty was framed in a negative light e.g. would you be “irritated” to find only Bounties in a tub, to use the answers to paint the picture they wanted.

It is clear as day that Mars Wrigley has it in for our beloved Bounty. Just last year, they ran an advertising campaign where, post festive period, you could send them any uneaten Bounties and they would replace them with the superior Malteaser Teasers.[4] But why wasn’t this the same for any other sweets in the tub? What about those who find Milky Ways too sweet? Or those who due to a peanut allergy cannot enjoy the hunger-busting allure of a Snickers?

It could be that most believe coconut in chocolate is as much of a crime as pineapple on pizza, and so for years it has been maligned (an example of cultural bias). Mars Wrigley could merely be exploiting this to generate headlines and keep their product in people’s conversations. I’m sure we all know someone who enjoys a Bounty at Christmas – my mum, for one. I discussed the “No Bounty” tubs with her, to her horror – but after clarifying it was a limited trial, she was relieved, and said that it reminded her to get a tub of Celebrations next time she was in the shops. But what if she was a more hard-line fan? This use of bias could alienate her from the Celebrations brand entirely and lose Mars Wrigley sales.

To help you empathise with this position – think back to the opening of this article. Up to this point I have been using framing bias to make you feel for the plight of the Bounty, to keep you reading. What if I told you that I actively dislike Bounty? That is the power of bias – by writing this article from another viewpoint, I broke down my own biases, and discovered the truth. Most would have read that 39% figure and thought, fair enough, most people don’t like Bounty – but that number isn’t most people.

To independently verify Mars Wrigley’s findings, I conducted a survey of my fellow APR colleagues, asking them to rank the constituent elements of a Celebrations tub in order of their most to least favourite. I listed the sweets like so: 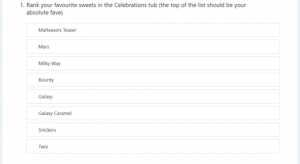 You will notice that I have placed Bounty right in the middle – this will avoid anchoring bias, as if I left it at the bottom of the list, people indifferent to the Bounty may be more likely to leave it down there. But make a note of the sweets I have left below it – this will be important later.

While this was a much smaller sample size than Mars Wrigley’s (47 responses compared to 2,000), we are able to come to some similar conclusions. Malteasers Teasers are by far the most popular choice, with only 8 respondents not ranking this sweet in their top 4 (these people all put it as their 7th or 8th favourite – a polarising sweet?). Unfortunately, the writing is on the wall for our beloved Bounty, which was chosen as the least favourite by 17 respondents – 36%, very close to Mars Wrigley’s figure.

But this ignores the performance of some of the other sweets – Snickers was 21% of people’s least favourite! Also, Twix had a rough day, with no one choosing it as their favourite, and 62% of people putting it in the bottom four. To highlight this, I created a points system, where if a sweet is chosen as someone’s first choice, it gets 8 points, second choice gets 7 and so on. When these are summed, we can see Twix doesn’t do much better than Bounty, with Twix scoring 178 points compared to Bounty’s 165:

So why hasn’t this sweet been targeted for removal? Maybe not being anyone’s favourite, but also not being anyone’s least favourite has kept it out of the firing line, while Bounty takes all the flak. This does give more evidence to the theory that Mars Wrigley have exploited Bounty’s problematic reputation for advertising exposure though – an issue that I am contributing to by writing this very article.

Now taking a step back to expose our biases – you may have noted that the four sweets I left at the bottom of the list in the initial ranking are much more likely to end up in people’s bottom four. This is likely due to people having a strong opinion on their favourites, spending more time on the top of the list, but not taking as much care with the bottom four, leaving the default options down there. There were a range of times taken to complete the survey (one respondent spending an agonising 6 hours on their choices), but I doubt the majority of this time was spent thinking which is worse out of two very similar tasting sweets.

In a very strange turn of events, since the release of the “No Bounty” tub, Mars Wrigley have enacted a new advertising campaign, entitled “#BringBackBounty”.[5] In short – despite their obvious bias, they are aware that the Bountyless tubs would cause controversy, and have produced a promotional video where an actor portraying the Bounty sweet (I can’t believe I’m writing these words either) is reunited with their fellow Celebrations, after the world called for the company to #BringBackBounty. This is backed up by a figure that, according to yet another Mars Wrigley survey, 58% of consumers would miss Bounty if it were removed from the tub. Here we have the almost inverse of the 39% figure from earlier being used to SUPPORT Bounties staying in the tub! (I assume some people could not give a yes or no answer on this pivotal issue, and are the missing 3%).

It is clear that Mars Wrigley have made a biased decision, in support of their own advertising goals. While they are not held to the same standards as actuaries are via the Actuaries’ Code, I believe they have done untold damage to the reputation of the Bounty with this campaign. The official tweet from Celebrations featuring this video only has 42 retweets[6], compared to the tweet announcing the removal of Bounty having 1,808 retweets. It turns out that facilitating a damaging campaign against your own brand is one genie that cannot be put back in the bottle, unlike Bounties which can be safely returned to the Celebrations tub if you do not like them. A lesson in the power of bias for us all.

So, in conclusion, there is a lot more to the issue than Bounty not being to everyone’s taste. Some people actually very much like the sweet, and will no doubt be disappointed this Christmas if someone has purchased a “No Bounty” tub. However, will they be afraid to speak up thanks to the societal bias against this sweet stoked by Mars Wrigley, in fear of becoming a Bounty pariah? Only time will tell, but I hope that after reading this you learn to see things from the side of a Bounty fan, and try to avoid bias in your own life. If not, then a future of Bountyless Christmases awaits us all. 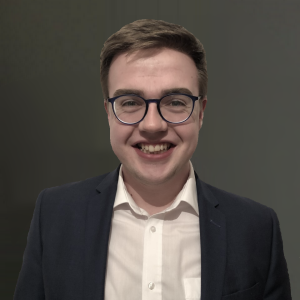