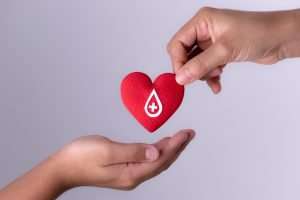 The prospect of blood donation was first suggested to me when I was in college, by a particularly inspirational physics teacher. At the time, I was both too young and too scared of needles to realistically consider donating blood. That fear kept me from donating for a few years, but eventually the thought of being able to contribute and make a difference was overwhelming and I signed up.

The process was rather simple: I filled in a form online, had a call to confirm I was eligible to donate and within a few days I was off to donate blood. As I waited to be called in, my mind started to wonder. Of course, being an actuary, it immediately jumped to risk management (anything to forget about the needles – although it turned out to be fairly painless in the end). More specifically, I started thinking about how the NHS (or whatever the equivalent body in charge of blood donation may be in other countries) can manage their blood levels so that:

In this article, I will look at a simple example introducing the key features of this problem and produce a worked example and interactive tool on how one may look to resolve this issue.

With any interesting problem, the devil is in the detail, and with blood donation that detail relates to blood types. As a point of clarification, when I reference blood donation in this article, I am referring to the donation of red blood cells* (which can be stored for up to 35 days – another restriction in this problem). 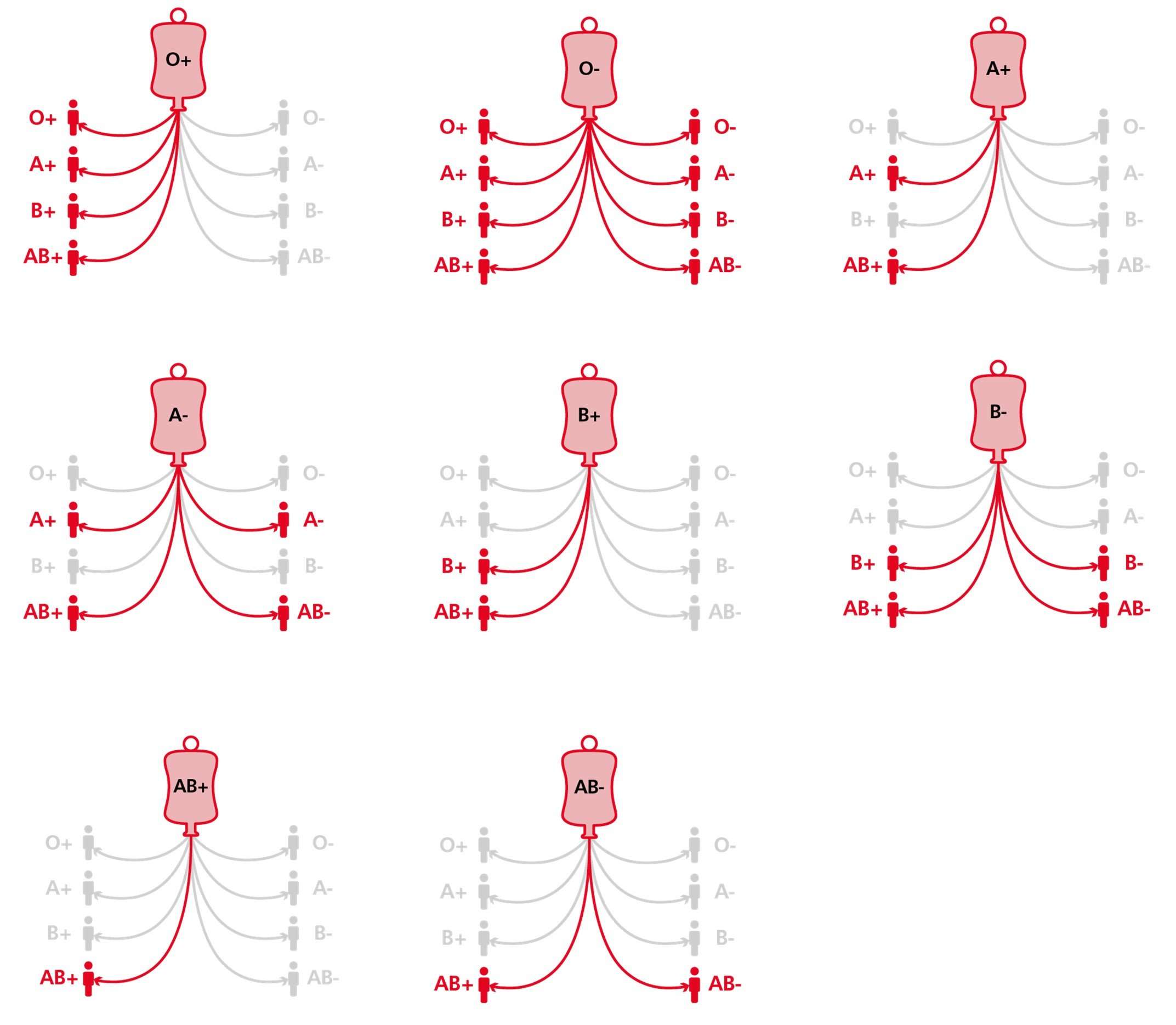 Alongside this information, the distribution of blood types also plays a key part in the problem. Blood type distribution varies geographically and so for this example I have taken the UK distribution, which is as follows [1]:

We now need population numbers. Given that this is a made-up example, let us keep the assumptions simple:

Here we calculate donations by blood type as follows:

Note that the annual donations required values do not quite add to 2,500,000, as would be expected, because of rounding of the blood group distribution percentages.

Thus, we can summarise the problem as follows. Given the distribution of blood types, the size of the eligible donor population, the limitations on who can donate to who, and the number of donations required for each blood group, how can we ensure that we have enough donations (with minimal wastage)?

On the face of it, this could be quite simple. We have estimated that 2,500,000 donations are required each year (2.5% of 100 million). An obvious solution is that we allow only donations from O Negative donors. Given that they can donate to all blood groups, we are guaranteed that the donations would be suitable, no matter the recipient. The issue however is that this would require approximately 40% of all eligible O Negative donors to donate blood each year (assuming donors only donate once per year). This seems rather ambitious!

Let’s reconsider and take a more systematic approach to the problem. Firstly, we use the above information, alongside our knowledge of who can donate to which blood group, to produce a range of the minimum and maximum donations required by donor blood group.

Note, the table above uses the following logic. For example:

The table in itself is not particularly useful given how large the ranges are in each blood group. However, they do allow us to gain insight into where potential shortfalls could lie – in particular, we need at least 5% of all eligible O Negative individuals to donate blood (again assuming donors only donate once per year). One would immediately want to question whether this is achievable and how these potential donors might be encouraged to donate blood. This analysis also paves the way for exploring other solutions, such as the one which follows.

If we had these numbers of donors then we could, hypothetically, guarantee that everyone requiring blood does indeed receive it. How can we be so sure? Well, we could allocate the donated blood so that the blood groups of the recipient and donor are the same – e.g. 200,000 B Positive donations are made which would all be allocated to B Positive recipients. As each blood group can donate to individuals of the same blood group, this would work for everyone. The additional benefit here is that we need an equal proportion of donations across each eligible blood group population (i.e. 5% of potential donors from each blood group need to donate – assuming once again that each donor donates once per year), and so we aren’t strained by attempting to recruit a higher proportion of donations from a specific blood group (like in our first solution where almost 40% of eligible O Negative individuals were required to donate blood each year).

However, this approach also has its drawbacks. For instance, in emergency situations we may not immediately have information on the recipient’s blood type and so would instead want to use O Negative blood as it is suitable for all recipients. We also should recall that the shelf life of donations is approximately 1 month, and so we require that for each blood group, the distribution through time of donations broadly matches the demand. Furthermore, if we allocate blood donations in this way then we also should consider the transport costs/logistics if there is a disparity between where donors and recipients are situated for each blood group. The solution is also idealistic; what if the proportion of donations by blood group naturally differs from 5%? How can we adjust the allocation so that everyone who needs blood receives it?

An even better solution

At this point, you may be thinking that there are far too many variables to generalise this problem – and I would agree. So, let’s take an actuarial perspective. And what do actuaries like doing most? Well of course that must be building models.

So, I went away and built a model in Excel which allows the user to play around with the various parameters that are involved in this problem. In particular, the user can change the assumptions and set the expected number of donations made by each blood group.

The challenge however is to see if the user can correctly distribute the received donations (see the ‘Donations & Distributions’ sheet of the tool) in order to ensure that everyone who requires blood donations does indeed receive them. When downloading the attached version of the tool, I have set the donations received numbers and you should look to edit the proportions in the ‘Donations & Distributions’ sheet so that you are successful. It may be that it is not solvable at all – but I encourage you to have a go for yourself to gain an insight into this problem and the potential challenges faced.

As alluded to earlier, the problem and tool showcased within this article are a simplification of the actual problem one may face (but no doubt should prove valuable insight into the dilemma) for many reasons. For instance, we may want to model stochastically the requirement of blood or even use a time series model. This would allow us to take into consideration the randomness of accidents and emergencies leading to blood requirements which could be combined with a more stable assumption about the needs of recipients who have more predictable, longer-term requirements. We could also build in allowance for differing levels of demand at various times of year.

And how about projecting the amount of donations? This too wouldn’t be uniform – could we use a time dependent model here? We also did not specify the relationship between the number of donors and the number of donations (the analysis within this article only considers the number of donations made). In fact, it is possible to donate roughly once every 12 (for men) to 16 (for women) weeks [3], and so our model could build in assumptions about the distribution and frequency of repeat donors.

There are also potentially transportation and additional logistical issues with regards to where the donors and recipients are located, particularly if the proportions of donors and recipients are not aligned locally. Would this mean that advertising needs to be targeted because for instance, it would be cheaper to pay everyone £10 for donating O Negative blood in London rather than transporting an excess from Edinburgh (for example)? Is this ethical?

It is also worth noting that it is better to have an excess which has uses in research and education, rather than to have a deficiency and risk patient welfare. However too much of an excess is also not beneficial because there would be costs related to the extraction of, and subsequent storage and disposal of, this unused blood.

Finally, as with any model, one should critically analyse and validate every aspect of it to ensure that it is suitable for the problem at hand (given I have just sat CP1, I could additionally list the requirements for building and validating a good model, but I will leave that as an exercise for the reader to think about).

I wanted to conclude by discussing why it is important to donate blood if you can do so. I have been fortunate to not require such donations, but I have relatives who required blood following accidents, and I am thankful that they were able to have near immediate access to this.

As someone who decided to donate despite being utterly terrified of needles, I was surprised by how relatively painless the entire process was and would not have donated again were this not the case.

If for no other reason, then it is an opportunity for you to make a genuine difference to someone’s life (and their family).

If you are interested in donating (and live in the UK) then the following link will provide you with further information – Can I give blood? – NHS Blood Donation

The model used for this article can be downloaded by clicking the following link: Blood Donation Tool 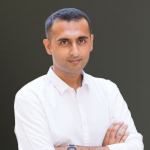 † Only those who are aged between 17-65 and meeting certain other requirements can give blood in the UK [3], so 50% of a developed country being eligible to give blood is a reasonable assumption.

‡ This is reasonable given that the NHS estimates that approximately 5000 donations are required each day in the UK [2], which has a population of approximately 70 million. This equates to an ‘annual required blood donations relative to total population’ metric of 2.6%. [2]