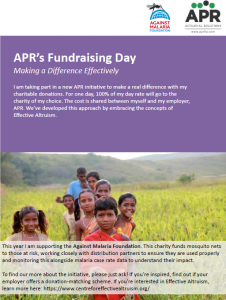 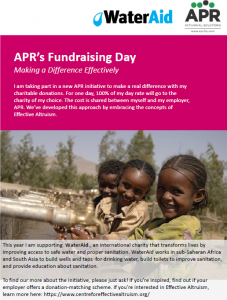 In a twist on APR's “1% of time” commitment for charitable work and volunteering, APR’s associate James Robinson came up with a novel way increasing participation in the scheme.

Inspired by William Macaskill’s book “Doing Good Better” about Effective Altruism, James proposed that rather than baking cakes or running marathons, APR’s staff could use their time most effectively by… going to their clients’ offices and earning their day rate!

The idea is that staff who so volunteered would contribute a working day with clients as normal, but would forego 50% of a day’s pay; APR would then pay 100% of the fee received for that day to one of a number of charities selected by staff as having particular resonance. 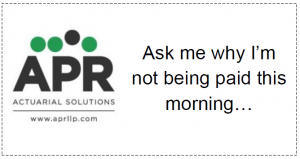 So, on 18 October 2016, eleven APR staff enjoyed the liberating experience of doing half a day’s work without pay, with the result that a total of £5,774.41 was raised for the selected charities – see below details of the organisations we supported and click on the logos to go to the charities’ websites.

An enjoyable day was had by all (it was even reported in the Actuary Magazine!), and there was sufficient interest among clients that we hope the idea might spread.  Thoughts are now turning to how we can make the 2017 day even more of a success.

“Everything we do is about getting clean water, sanitation and hygiene to everyone everywhere by 2030. We deliver services and make change happen.”

WaterAid tackles the reasons why millions of the world’s poorest people live without these most basic human services.

“We help protect people from malaria.”

Against Malaria has a simple aim of funding fund anti-malaria nets, specifically long-lasting insecticidal nets (LLINs), and work with distribution partners to ensure they are used. We track and report on net use and malaria case data. 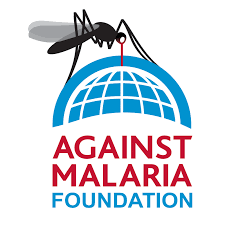 “In 2016, more than 26 million people benefited from IRC programs and those of its partner organizations.”

The International Rescue Committee responds to the world’s worst humanitarian crises and helps people whose lives and livelihoods are shattered by conflict and disaster to survive, recover, and gain control of their future.

“When things get challenging or difficult, our nurses work alongside people with dementia and their families.”

Dementia UK provides specialist dementia support for families through our Admiral Nurse service.  This provides families with the one-to-one support, expert guidance and practical solutions they need, and that can be hard to find elsewhere.

“Centrepoint is not a 9-5! We run hostels seven days a week, every week of the year - even Christmas day.”

Centrepoint is a charity with hostels in London, Bradford and Sunderland, and partnerships all over the UK.  It aims to give homeless young people a future and has the laudable ambition of ending youth homelessness. 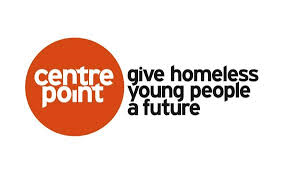