A Playful Introduction to Lloyd’s of London 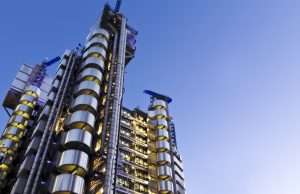 At APR, we are resourceful by nature, and we dare to come up with innovative solutions. We also have a strong focus on training, and so some of our General Insurance actuaries put their heads together to communicate the history and operations of Lloyd’s of London, via the medium of a play. Apologies in advance to all thespians and playwrights, who are used to much higher quality productions, and for any ensuing historical inaccuracies – we’ve tried our best.

Businessman 1: What do you think of this new fashionable drink?

Businessman 2: The coffee? I think it’s terrific – really gets you going in the morning. It’s lovely to be able to enjoy it at Lloyd’s coffee shop.

Businessman 1: Yes, well, since that fire on Pudding Lane wiped out most of the City, this place has become rather important as a hub to do business. All these people scribbling away with their quills – I hope they buy enough coffee so that Lloyd can make some money.

Businessman 2: It’s the shipping folk that do the big business round here. They chat to the merchants, work out what’s selling well, what the people want, and then send their captains to all four corners of the Earth to bring back the treasure.

Businessman 1: You know the Earth doesn’t have corners? The Greeks worked that one out. We might be old fashioned but we’re not that backward.

Businessman 2: It’s just a saying. I know the Earth’s actually an ellipsoid.

Businessman 1: A what? Anyway, do you know they lost a ship off South America? Full of gold.

Businessman 2: Oh dear, I didn’t know. I wonder if they had insurance?

Businessman 1: Insurance? I don’t think so. It’s one thing when it’s a house – any rich businessman could cover the cost of a new house. Or indeed insuring a horse and cart – you just have to carefully price the young drivers. But a ship? You’d have to have a lot of spare cash (let’s call it “capital”) in order to convince a ship owner that you’d be able to pay out if their ship sank in a storm, or was captured by pirates.

Ship Owner: Did you hear about that ship that went down off South America? Full of gold.

Ship Captain: I did. I first heard about it in this very establishment. Lloyd’s coffee house is becoming a good source of news.

Ship Owner: Well, it’s made me reassess the business. I put my life savings into that ship, and if we lose it, I won’t have a source of income. With the storms off South America and the pirates in the Caribbean, I think it’s too dangerous to have that ship…

Ship Captain: Dangerous? For you? Your life isn’t at stake! I’m the one going out in those high seas.

Ship Owner: So you’re aware of the dangers? Maybe we should sell the ship and set up a coffee house instead.

Ship Captain: No, don’t do that. I’d be out of a job, and my skills aren’t transferable to making coffee. It would take me years to learn to froth milk and swirl it into a heart shape. 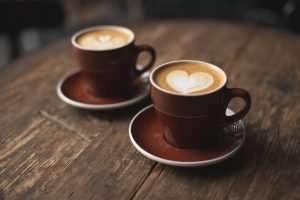 Ship Owner: If only there was a way of spreading the risk. Sharing it amongst a group of rich people, so that I can make good money when things go well, and ensure that my finances don’t suffer too much if I lose my ship.

Rich person 1: Oh, I wish I could put my money to good use. Property is over-valued, and bitcoin won’t be invented for a few hundred years.

Rich person 2: I’m interested in putting my money into shipping, I think it’s the future, but I wouldn’t want to buy a whole boat. It’s too risky. I also don’t know how to sail.

Rich person 3: So much money. I’d be happy to take a gamble with invest it and earn some more.

Underwriter: With all this shipping news, I’ve used my spreadsheets to work out how many ships are sunk, and how many go to the pirates. Just by pivoting this table, I can split that down by ocean, make of ship, time of year, and cargo type.

Lawyer: Isn’t that clever. But what’s the point? I’ve read up on all international shipping law, and I’m an expert in contracts, but I don’t think it’s much use.

Businessman 1: Well well well. Who would have thought this would all come together in Lloyd’s coffee house?

Businessman 2: It’s an interesting business opportunity. We should bring them all together, and see if we can insure this ship. We’ll have to make sure we get our slice of the profits.

Businessman 1: Don’t you worry. We’ll make sure to add value and take our cut.

Businessman 1: I take it that you are concerned about the risk that storms and pirates pose to your ship. That’s completely understandable. Perhaps some sort of insurance might be good for you (similar to what we have for houses these days, or horses and carts). It would be too much for one businessman to insure you against such risks, but perhaps if multiple businessmen were to work together, we might be able to share the risk enough that no man faces the potential for financial ruin.

Ship Owner: That sounds like an excellent idea. Perhaps I could write down my ship’s details, my plans for the year’s trading, and you could negotiate me a deal.

Businessman 1: Excellent. I’ll speak to the others and report back. By the way, you might also want to employ a first mate, in case your Captain becomes ill, or is lost overboard.

Ship Owner: Hmm, I hadn’t thought of that. What an excellent idea for reducing risk.

Businessman 1: You all are involved in house insurance, I understand?

Businessman 1: And you’re looking for other opportunities to gamble invest your money?

Rich people: Yes. Since the Great Fire on Pudding Lane, we’ve made plenty of money from house insurance, as there haven’t been any fires.

Businessman 1: Well, there are ship owners who would like insurance, but struggle to find someone who is willing to provide the financial backing.

Rich people: Interesting. But we wouldn’t know where to start with ships.

Underwriter: Well I’ve analysed all the data. Of ships heading to South America, 1% are sunk in storms, and 2% make it into the hands of pirates. Adding in a bit of profit, if I were insuring a ship, I’d want to receive at least £5 for each £100 at risk, per year.

Lawyer: And I’ve read all the rules about global shipping, so I’m prepared to write insurance contracts and, if necessary, to negotiate with pirates to get these ships back to their rightful owners.

Businessman 1: Ok, so maybe you guys should act as agents to manage the insurance affairs for these businessmen. Let’s call you “managing agents”. I’ll expect you to do some due diligence into these three rich people, make sure they have available assets to pay claims as and when they arise, and make sure they don’t take too many other insurance risks with their money. The owner would like to be covered for £10,000, so that’ll be a premium of £500 according to your logic. Are you happy with that?

Underwriter: Yes, that sounds like a plan. We need a name for these rich people. We’ll create a structure called a “syndicate” – I’m not sure why, but it sounds good. Then we’ll call the rich people “members” of the syndicate. You go back to the owner, let them know that we’re happy to insure him for £500, per year.

Rich people: Sounds good to us.

Ship Owner: Excellent stuff. Here’s the £550. Make sure the contract is well worded and signed. Captain, pack your bags, you’re back to work tomorrow.

Edward Lloyd: Excuse me. If you’ll be doing business in my coffee house, based on my advice, I expect to receive some money. How about 1% of the premium?

Broker: Fine. Here’s 5 and a half pounds. Managing agent, please write your name and acceptance of the risk under the details of the ship. I guess that makes you an “underwriter”. Here’s your £500.

Underwriter: Pleasure doing business with you.

Narrator: The managing agent represents the members, and provides business services to them in order to run an insurance syndicate. The businessman gathered details from the risk owner and negotiated the deal with the managing agents, providing his services (and taking a cut), thereby becoming a broker. Lloyd’s coffee house acted as a marketplace, providing a location to do business, share news and weather information, and instigating the sharing of the risk.

This story describes a single syndicate insuring a single risk. Over the next couple of centuries, Lloyd’s gains a reputation as the best place to buy all types of insurance for any global risk, and a good place to put your capital for strong returns. Customers could be sure that their Lloyd’s insurance policies would pay out, whereas European nobility and royalty occasionally decided not to pay claims. Lloyd’s had the expertise to underwrite specialist risks, and the structure to spread large risks among many members in an efficient way. 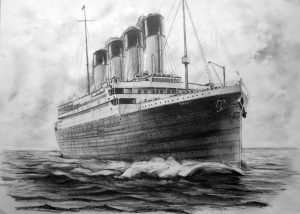 Broker Willis Faber & Co: Roll up, roll up, the unsinkable ships are here. Southampton to New York, New York faster than any ship ever before. Easy money to be made insuring these two: the Titanic and the Olympic, owned by the White Star Line. I am Broker Willis Faber & Co. After careful consideration, we have determined a generous price for you underwriters: £7,500 in premium for £1,000,000 insured, for each vessel. Today you represent your syndicates in an historic event. Write your name, and syndicate number, and how much risk you are willing to accept under the slips in the usual place. I expect we’ll be fully subscribed by the end of the day.

Narrator: Previously, multiple members collaborated to form a syndicate to share a risk. By now, risks can be shared across syndicates, allowing larger risks to be easily insured. Syndicates do this by co-underwriting, or by reinsuring, sometimes using an Excess of Loss approach on a whole portfolio.

Lloyd’s: Well done everyone. Partly thanks to Cuthbert Heath’s recent San Francisco experience, we have an excellent reputation for paying claims. Remember that we’ve recently tightened up our solvency and auditing requirements. We haven’t yet set up a Central Fund, but nobody needs to worry about that just yet.

The bell rings at Lloyd’s coffee house to announce the loss of the ship.

Lloyd’s: The Titanic sunk in the North Atlantic after hitting an iceberg.

Broker Willis Faber & Co: Perhaps the ship wasn’t so unsinkable. The human loss is even greater than the financial loss, and that cannot be recovered. Please pay your share of the financial losses in the usual way.

Lloyd’s: Thank you to all those involved in swiftly paying these claims, in just 30 days. It further enhances the reputation of this great insurance marketplace.

Narrator: Lloyd’s has developed considerably since its early days in a coffee house. Over £35bn of premium is written through Lloyd’s annually, and the market’s capital resources are of a similar order of magnitude. Lloyd’s provides syndicates with worldwide licenses, a physical place for doing business (known as “The Room”), services to facilitate business activities, and a Central Fund that acts as a capital buffer of last resort.

It now faces much more modern challenges, such as climate change, fast-developing cyber insurance, and the Covid-19 pandemic. While modernising rapidly, some of the structure and language remains rooted in history and  tradition: “underwriter”, the 3-year accounting period, the use of the Lutine bell, and, of course, the name of the marketplace. 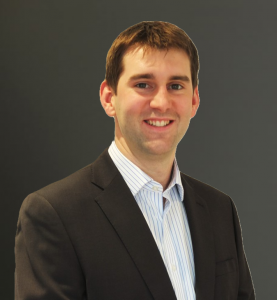